You are at:Home»Reviews»Bahram Beyzaie, A Mosaic Of Metaphors, a must see

Bahaman Maghsoudlou an Iranian/American filmmaker, has dedicated his life in recording valuable information about Iran’s contemporary art and culture. Bahman’s films are not only introducing Iranian artists and art to the world, but overtime it will turn into a treasure of information for future generations.

I have always admired Bahaman Maghsoudlou for his tireless and continues work, but I had always been waiting for him to prove himself as a filmmaker with certain point of view. And all this has happened with his latest documentary feature, Bahram Beyzaie, A Mosaic Of Metaphors.  Bahram Beyzaie,…. is a very powerful, artistic and creative work that leaves a lasting impression on you. Or better say it has a magical spell!

Bahram Beyzaie is one of the great filmmakers of Iran with an impressive body of work that has been ignored by the western film critics, distributors and film festivals. Beyzaie is a unique filmmaker and his films may not be satisfying for the western film critics that are acting more like archeologists, trying to find only exotic item for their antic collections. Beyzaei’s films don’t have a domestic touch, they deal with universal approach, even on those films that deal with specific Iranian history and metrology topics. Could this be the reason that his magnificent work has not been appealing to the western critics? But I believe Bahaman Maghsoudlou’s Bahram Beyzaie, A Mosaic Of Metaphors could change this course. 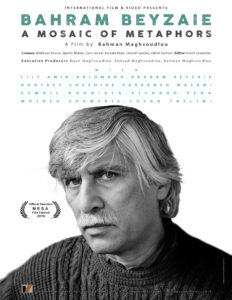 Bahram Beyzaie, A Mosaic Of Metaphors has a very dynamic tempo and like an exciting and fascinating thriller nails you  to your seat and forces you to watch the film up to its last second. Even for me as an Iranian/American that I have known Beyzaie’s films for many years Bahaman Maghsoudlou offers me new discoveries to the complicated world of this great filmmaker. To me Beyzaei has the same understandings about life and love and people that legendary authors like Hitchcock and Akira Kurosawa had.  This point has been well reflected in this documentary.

Bahman Maghsouldlou’s Bahram Beyzaei….has a very strong and solid structure and all its parts, film clips and interviews are like parts of a mosaic that are masterfully put together to creates a beautiful and lasting artwork.
Thanks to Bahman Maghsoudlou, It’s now time for the world to get to know Bahram Beyzaei, another great  filmmaker from Iran.